Hit enter to search or ESC to close

Sandra and Leslie have been fostering with us for almost 6 years. Since they started fostering, they have looked after one child, Gracie (not her real name), who now lives with them permanently. They have also looked after other children through periods of short breaks and day care. Sandra shares her fostering journey with us.

Why did you and Leslie decide to start fostering? 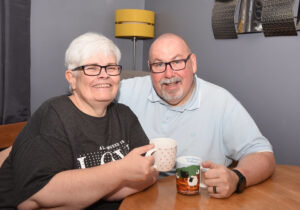 I was widowed in my mid-thirties before meeting and marrying Leslie. Leslie was also married before, so we very much believe in second chances. Because we don’t have any birth children between us, we thought that maybe we could give somebody a second chance.  For us to be able to give a child that stability and be their family was a huge thing.

We thought about it lots of times over the years, we had seen advertising campaigns and things like that. Twice we had started the process, we dipped our toe in to get more information and it wasn’t the right time for us so we withdrew. The third time we were going through the process, the timing was just right, I was made redundant so everything just fell into place.

We always wanted to foster a child permanently so we’re lucky it’s worked out that way. We have done periods of short breaks and emergency care, but now we’ve made the decision that it’s better to stay just the three of us, which means we can be there properly to support Gracie through her teenage years.

Before you fostered Gracie what were you apprehensive about?

House rules mainly, things like am I going to be too strict, are bedtimes right, are we expecting too much from her? Because if you haven’t been a parent, or even if you had been a parent, you’re second guessing yourself. Because we’re a couple we could bounce off each other. At the end of the day, we could talk about how things went, what worked well what didn’t work well.

But after the honeymoon period all those fears melted away. We quickly built up a rapport with both Gracie and her mum. Her mum came for a coffee, seen her room and that definitely helped, she could see that Gracie was safe and well looked after. I keep in touch with her mum by text and I’ll meet up for coffee and catch up with her. It just works.

What is the most rewarding thing about fostering? 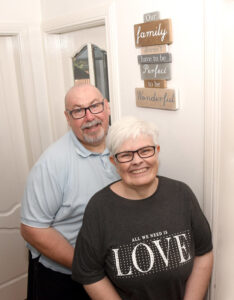 Being able to show a child love and stability.

Because of the way we bring her up with rules, routines and boundaries, Gracie is absolutely thriving. She has great reports from school, she’s doing all Nat 5s and has picked all her subjects. Her Head of House says that we’re a credit to Gracie and that she’s perfectly capable of going to university.

We’re big on life skills, doing the washing, loading the dishwasher, walking the dog, baking and making soup etc. Seeing her learn to do these things, and it just becoming a natural pattern is great.

She is such a lovely, well-mannered young lady, and we take pride in that, especially when other people say she’s so polite.

Why did you choose Falkirk Council?

There are different agencies, but from what we looked into, it seemed to be that the agencies didn’t have the training or support available that Falkirk Council did. Although agencies said that they’ll pay us more, they didn’t have the support to back us up. We chose Falkirk Council, knowing that if we did have any problems, there was that local support, there was always someone at the end of the phone and there was comprehensive training too.

How have you found the support from the council?

Really good. We had our initial social worker for 5 years, she was amazing. I could call her at any time. We’ve had some challenging behaviours and the support we’ve had from both our worker and the rest of the team was amazing.

I would normally go out with one another foster carers for coffee or lunch and a chat. We’ve got a private Facebook Messenger chat as well, so we all talk that way and arrange breakfast clubs and things like that.  Having a network is so important, to build up a relationship with other carers. Not just for helping look after your wee one or whatever you’re doing, but it’s so useful as a sounding board.

From our family and friends’ point of view, Gracie is the granddaughter, the niece, the cousin. It’s as if she’s always been here. She’s part of the family, she’s ‘claimed’ and that is a huge thing for any child.

What would you say to anyone thinking of fostering?

First of all, think about what type of fostering you want to do, and what will work best for you. There are so many different options, short breaks, emergency, long term. And then think about the age of the child or children you’d like to foster. That makes such a difference.

Do you have any tips for new foster carers?

Have you been inspired by Sandra and Leslie’s story? Get in touch with the team today to start your fostering journey.

This website uses cookies to improve your experience while you navigate through the website. Out of these cookies, the cookies that are categorized as necessary are stored on your browser as they are essential for the working of basic functionalities of the website. We also use third-party cookies that help us analyze and understand how you use this website. These cookies will be stored in your browser only with your consent. You also have the option to opt-out of these cookies. But opting out of some of these cookies may have an effect on your browsing experience.
Necessary Always Enabled
Necessary cookies are absolutely essential for the website to function properly. This category only includes cookies that ensures basic functionalities and security features of the website. These cookies do not store any personal information.
Non-necessary
Any cookies that may not be particularly necessary for the website to function and is used specifically to collect user personal data via analytics, ads, other embedded contents are termed as non-necessary cookies. It is mandatory to procure user consent prior to running these cookies on your website.
SAVE & ACCEPT